Feuerstein and his employees. In contrast to normal practice in an era of corporate downsizing and layoffs, Mr. Feuerstein told his employees on the night of the fire that they were the business and he was keeping all of them on the payroll for 90 days. It was an emotional moment.

A man who worked at the plant told NBC, "I have never seen so many grown men cry. At age 71, tall and lean with a chiseled face, penetrating eyes and wavy gray hair, Mr. Feuerstein is the patriarch of the family business that his grandfather founded at the turn of the century.

The discussion was about his grandfather who, when he started the business, insisted on paying his workers before sunset. His father explained that the practice was cited in the Torah, in the book of Deuteronomy Feuerstein read the passage in Hebrew and English.

He is poor and needy, whether he be thy brethren or a stranger'--and by stranger they meant all people, all faiths, all races," he said. 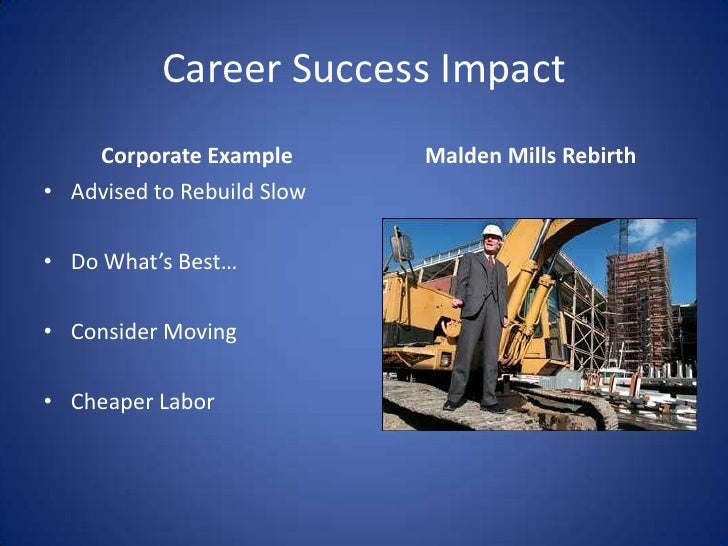 And the sunset should not appear upon these unpaid wages because he can't afford it, and he would cry out against you to God, and you would have sinned. Feuerstein condemned excessive pay to corporate CEOs, which he said was the result of "an unholy alliance between the moguls of Wall Street and executives with stock options.

The source of quality, he said, is the blue-collar workers, the doers--not just the engineers and the thinkers. But in the last analysis, it is the man on the floor who is going to get that quality for you. If he feels he is a part of the enterprise and he feels he is treated the way he should be treated, he will go the extra mile to provide that quality.

Feuerstein said, "A lot of the publicity I'm receiving is really not deserved. It is, rather, a sad reflection and commentary on our times. Then maybe one could argue that the only way to eke out a little more profit is to cut down on the hourly wages.

We want to distance ourselves as much as humanly possible from that commodity market. We are interested in making something different, to innovate, and with our research and development, and with our engineers, to make a product that is of better quality and has a better performance than anything else in the marketplace.

The ball game is in the marketing, the merchandising and the branding--in order to combine the better quality with a brand. The brand is critically important. When the consumer goes to the store, how can he possibly know what he is buying--how can he give preference to Malden Mills and Polartec with our superior quality and performance--if there is no label, no advertising?

Fire belching out of the windows of the old mill complex, joining together into a giant fireball covered by black smoke, going all the way up to heaven. What could one do in such a situation? No time for crying, no time for weeping.

No, I'll not weep. I have full cause of weeping but this heart shall break into a hundred thousand flaws or ere I'll weep. Feuerstein, "the weeping is a way of feeling sorry for yourself," and one can't think creatively when weeping. Three huge buildings were burning to the ground, even though Malden Mills had the latest fire-sensing devices and sprinkler system.

Feuerstein said, by "a miracle. But as you know, every miracle is connected with people. Thirty-six of my people were in that building, fighting the fire all night long, and they succeeded," even when local and state fire officials said it was hopeless.In the case of Malden Mills, the main ethical dilemma was whether to keep paying the company’s employees or have a massive layoff.

This dilemma was a mix of personal and business problems. Part of the problem was personal because the company was located in a small town where a majority of the residents worked at the mill.

After many in the normally skeptical MIT audience wiped away tears while watching an NBC video on the Malden Mills fire, owner Aaron Feuerstein quoted the Torah and Shakespeare as he discussed his personal and business philosophy last Thursday in Kresge Auditorium.

Through Chapter 11, Malden Mills is fully operational and conducting business as usual. Gorlitz Fleece GmbH, a wholly owned subsidiary of Malden, based in Gorlitz, Germany, will continue operations unaffected by the U.S.

Putting people before profits: Classic PR case study, but without the fairytale ending